This upload method can also be used with (pre)signed URLs from cloud storage services such as AWS S3 and Google Cloud Storage.

The FTP/HTTP(S) and cloud storage upload method copies files to CAVATICA from the following sources:

This method allows you to import a single file, a directory (FTP), or a list of URLs (HTTP(S) or pre-signed URLs). They are imported in the same job. Additionally, active imports run in the background on CAVATICA and do not depend on your local network speed. This allows you to multitask as your files are added to your project.

Use the import feature 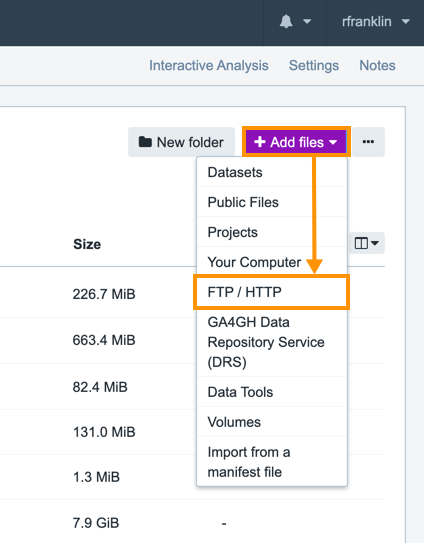 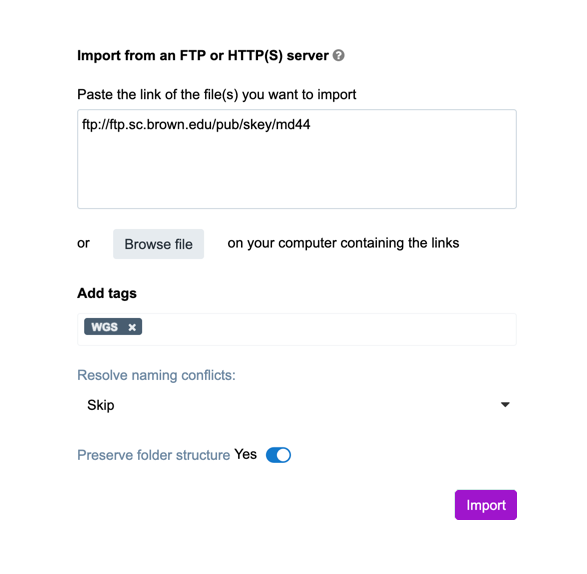 Track the import progress under the import status icon on the right-hand side of the main menu.

When the upload completes, review your files in the Files tab of your project.

The FTP/HTTP(S) tool can submit usernames and passwords to the server. To do this, you should include the username and password in the links that you pass to the tool, using the standard HTTP syntax: http://username:[email protected]/sample/.

Pasting in a link formatted in this way will attempt to authenticate with the server example.org using the credentials username and password and then try to fetch everything that is hosted under the directory/sample/.

Naming conflicts happen when you try to import an item (file or folder) from an FTP/HTTP server to a project's root folder or subfolder, where an item with the same name already exists. The list below illustrates the possible cases of naming conflicts and the way they are resolved depending on which option is selected in the Resolve naming conflicts dropdown: 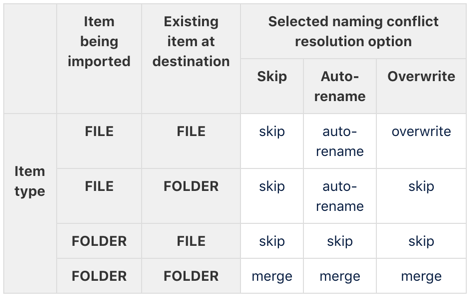 If the CAVATICA FTP/HTTP(S) import feature fails to upload all the files whose links you provided, please retry by providing shorter lists of links.