CAVATICA allows you to import DRS files from either open external sources or the following compatible Seven Bridges environments:

After importing the files, you can then use them as any other file on CAVATICA. Please note that the actual files physically remain hosted on the source platform and are only linked to CAVATICA.

Learn more about the procedure for generating a DRS manifest.

In order to be able to import a DRS file, your account on CAVATICA has to be connected to the DRS server of the environment you are importing data from.

Learn more about this procedure. 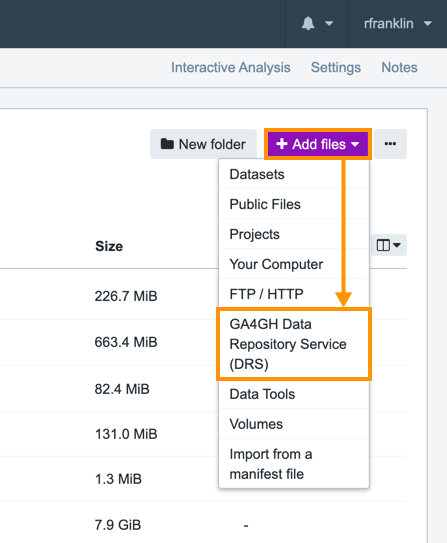 The page for importing files is displayed. The following two options are available:

The maximum number of links you can put inside the text area is 500. To import again, you will have to wait for 5 minutes.

In addition, please bear in mind that all other API calls you make within this time frame will also count toward this limit. URLs should be entered one per row.

Import from a manifest file

To import files from a manifest file: 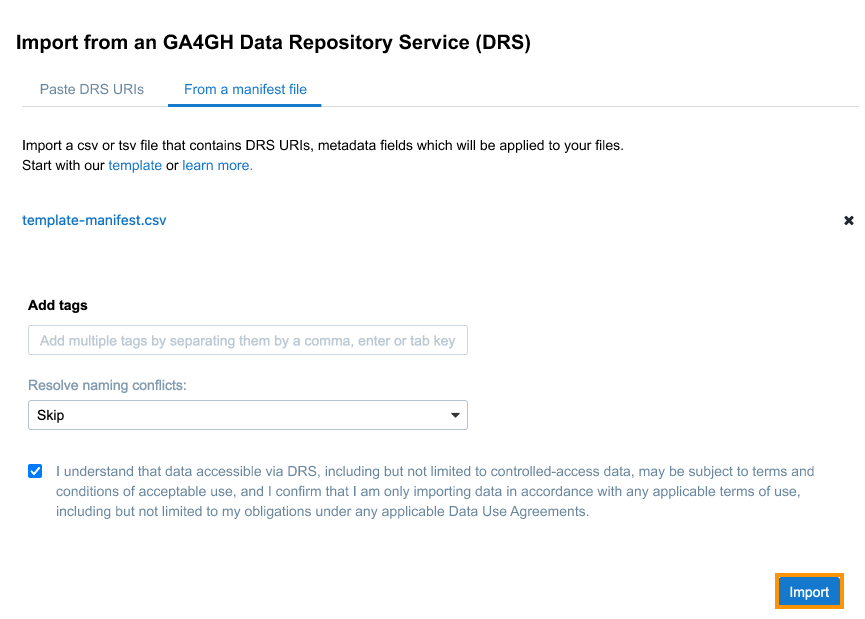 The files are imported to your project.

The following rules apply for creating the manifest file.

ADD TAGS TO THE FILES

To make it easier to visually identify and organize files you can tag them before the import. Separate tags with commas or press enter.

All tags which are already in the selected project are autosuggested in the drop-down menu. Learn more about tagging your files.

Naming conflicts happen when you try to import an item (file or folder) from a DRS server to a project's root folder or subfolder, where an item with the same name already exists. The list below illustrates the possible cases of naming conflicts and the way they are resolved depending on which option is selected in the Resolve naming conflicts dropdown:

Track the import progress under the import status icon on the right-hand side of the main menu. When the upload completes, review your files in the Files tab of your project.

Form a DRS URI on a compatible Seven Bridges environment

This step takes place on the CGC or BioData Catalyst Powered by Seven Bridges.

A DRS URI is formed by appending the ID of the file you want to import, to the DRS endpoint of the environment you are importing the files from.

To form a DRS URI for importing a file: