This tutorial will explain how to create a Docker image containing two custom Python programs, using a Dockerfile to build the image. You will then learn how to push the image to the Seven Bridges image registry.

The scripts used in the tutorial are:

xFor this tutorial, you will need:

1. Create a project on CAVATICA

To create a project: 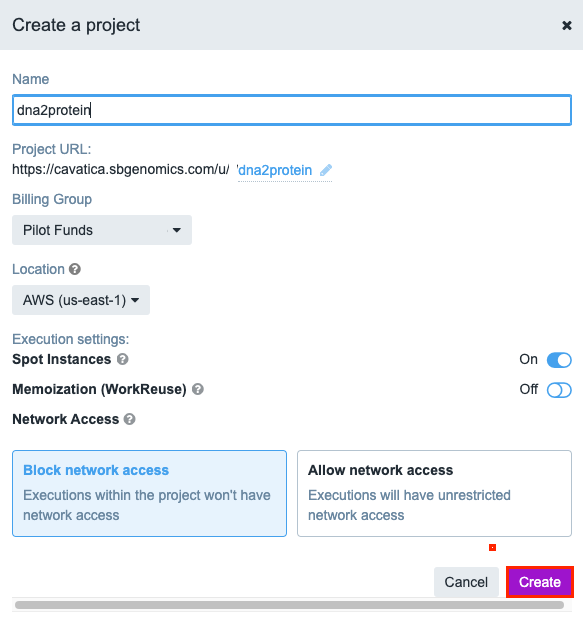 Depending on your operating system, first make sure that Docker is started:

You are now ready to build the image.

The image is built based on the instructions in the Dockerfile, which is supplied in the downloaded archive.
When the build process is over, you will have a newly created image containing the Python programs.

Then display the help messages for the programs:

This command should return:

You can do the same with translate.py:

You have now successfully created and tested a Docker image containing the software.

3. Push the image to the Seven Bridges image registry

As you now need to push the image to the Seven Bridges image registry, you have to specify the repository name for the image, according to the following naming convention: images.sbgenomics.com/<username>/<repository_name>:<tag>. Note that the <username> part needs to be your CAVATICA username, while <repository_name> must be at least 3 characters long and can only contain lowercase letters, numbers, ., - and _. Learn more about repository names in the Seven Bridges image registry.

If you signed up for CAVATICA by explicitly selecting Google Cloud Platform as the cloud service provider, you will need to use Docker Hub to store your images, instead of the Seven Bridges image registry. For detailed instructions on how to push your image(s) to Docker Hub, please refer to the official Docker Hub documentation.

If you signed up for CAVATICA before August 2015, the cloud service provider will be Amazon Web Services US by default.

The repository name also includes the version of the software we are wrapping for use on CAVATICA, which is currently 0.5.4.dev.

You should enter your authentication token in response to the password prompt, not your Seven Bridges password.

Once the process has been completed, use the Tool Editor to provide a description of the programs on CAVATICA.