CAVATICA hosts both The Cancer Genome Atlas (TCGA) and the Cancer Cell Line Encyclopedia (CCLE), two datasets you can use in your genomics analyses. On this page, learn more about these datasets as well as their underlying metadata structure.

TCGA is one of the world’s largest cancer genomics data collections, including more than eleven thousand patients, representing 33 cancers, and over half a million total files. Data collection for TCGA began in 2006 as a joint effort by the National Cancer Institute (NCI), National Human Genome Research Institute (NHGRI), the National Institutes of Health (NIH), and the U.S. Department of Health and Human Services. CAVATICA provides powerful methods to query and reproducibly analyze TCGA data by itself or in conjunction with your own data.

TCGA data is made available on CAVATICA through an integration with the Seven Bridges Cancer Genomics Cloud (CGC). TCGA on CAVATICA includes both Open and Controlled Data. While all data in TCGA is stripped of direct identifiers, DNA information is inherently unique to an individual. Two types of data access ‘tiers’ (Open Data and Controlled Data) have been put in place to balance the desire to make TCGA data as widely available as possible while ensuring that the rights of study participants are well protected. You can access TCGA Open Data on CAVATICA after you are authenticated and agree to data use policies. In addition, you can obtain access to Controlled Data through the NIH via the Database of Genotypes and Phenotypes (dBGaP) site.

The Cancer Cell Line Encyclopedia (CCLE) is a project performing detailed genetic and pharmacologic characterization of a large number of human cancer cell lines, permanently established cell cultures derived from patients that will proliferate indefinitely given appropriate fresh medium and space. The CCLE is the result of a collaboration between the Broad Institute, the Novartis Institutes for Biomedical Research, and the Genomics Institute of the Novartis Research Foundation.

Learn more about the CCLE public project and the CCLE metadata schema.

##Metadata for public datasets on CAVATICA

Entities are particular resources with UUIDs, such as files, cases, samples, and cell lines. These can be the subject of your query.

Properties can either describe an entity or relate that entity to another entity. For instance, properties include an entity's vital status, gender, data format, or experimental strategy.

View the metadata schema, which includes a list of entities and their related properties, for the following datasets:

Below, learn how to start working with datasets via their metadata on the visual interface.

The The Data Browser allows you to explore datasets using an interactive graphical interface. Start by building queries to filter data using various metadata attributes. Then, access these files for further analysis.

To access the Data Browser, click on Data on the top navigation bar and select Data Browser. You'll see the screen below. Here, you can select the dataset to query. 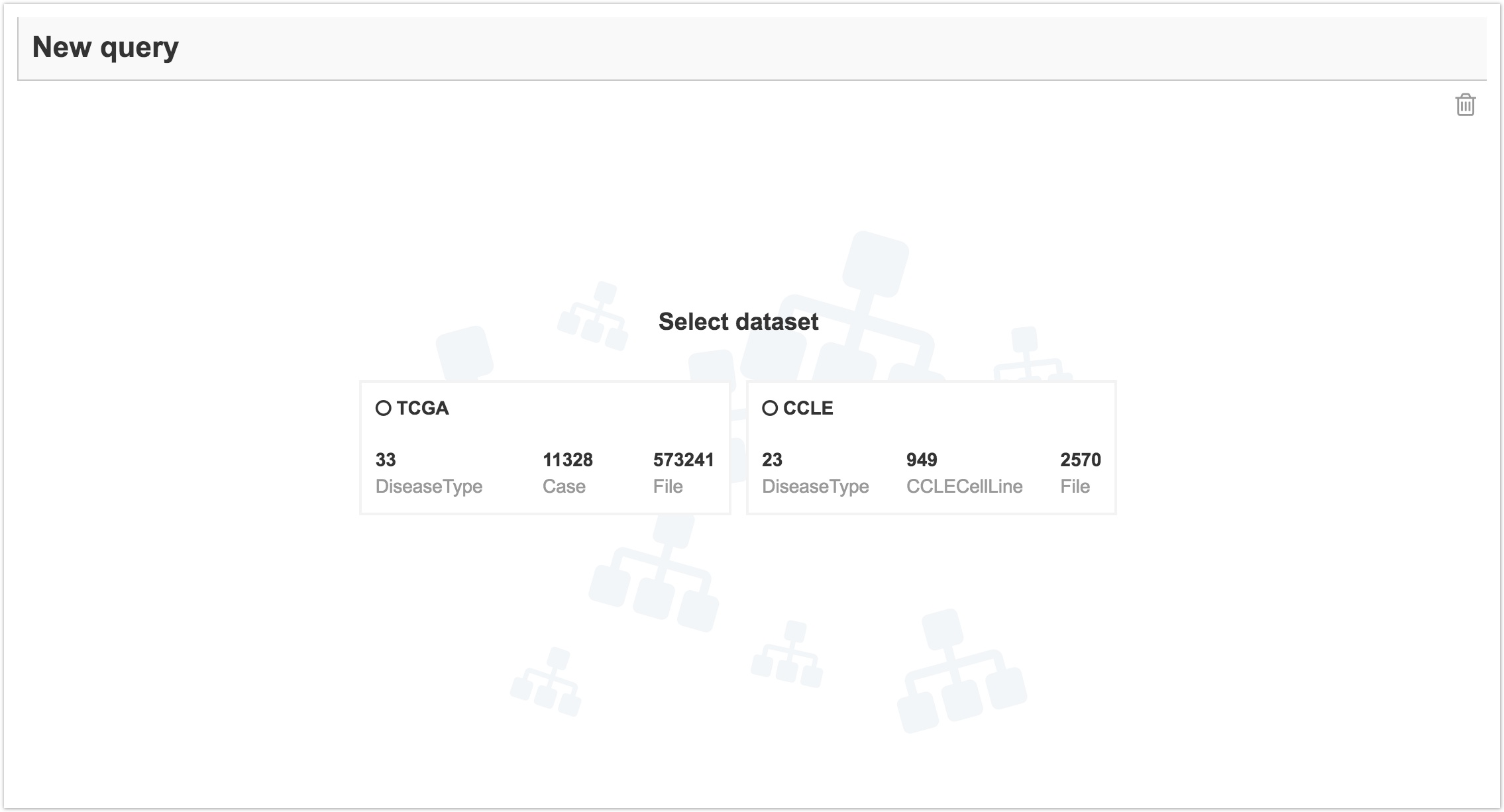 Take advantage of pre-built example queries or build your own from scratch using metadata entities and properties. Learn more about queries in the Data Browser.

Once you've located specific files using a Data Browser query, you can access this data for further analysis.

Remember, TCGA contains both Open and Controlled Data. When you attempt to access TCGA data from CAVATICA, you will be asked to authenticate with dbGaP. You will only be able to access the data for which you are approved. Learn more about TCGA data access on CAVATICA.